Let’s just cut to the chase and debunk some myths about women who regularly wear makeup once and for all, because it’s 2018 and women need to start worrying more about having each other’s backs and less about what’s on each other’s faces. Mmkay?

They aren’t comfortable or happy with themselves

Most women who wear makeup have no problem with the way their face looks without makeup, they just prefer a face with some contour and a nice set of brows (and highlighter, lashes, concealer, lipstick, and eyeshadow.)

They are naturally drawn to color and the art of makeup itself, it captures their eye and excites them. Or maybe they just prefer not having bags under their eyes and revealing that their eyebrows never fully recovered from over plucking in the 90’s

It may sound strange to non-makeup wearers, but people who wear makeup actually tend to feel more like themselves with their makeup on.

Putting on makeup is a little like getting out of your pj’s and putting on something that makes you feel fabulous. Sure, the pj’s are comfy as hell and you want to live in them forever, but let’s be honest, all you gonna be doin’ in them jammies is snackin’ and neflixin’ girl.  When you put on something that makes you feel amazing you will be channeling your inner Beyoncé.

Acne sufferers or people with skin issues may feel a bit more confident with some foundation on, but it doesn’t mean they don’t love themselves without it.  And honey, what’s wrong with being confident.. uh uh ah?

They are doing it to attract men

OH GIRL NO, NO, NO.  I don’t have formal statistics on how many men say they prefer women who don’t wear makeup, but based on my travels through the interweb and life, I can conclude that men generally have no clue what not wearing makeup actually looks like, in spite of the fact that they say they prefer less makeup or none at all. So, that would defeat the purpose of wearing it for men, yes? The women I know who wear makeup, do it for themselves, because they enjoy it. Period. 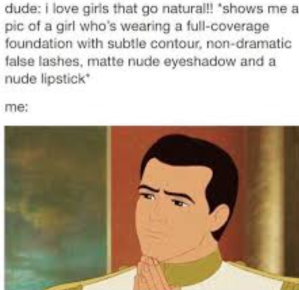 They are shallow, stuck up, vain, or {insert other negative connotation associated with wearing makeup here}

Um. This one is my favorite, because I feel like all logic goes out the window when people make these kind of assumptions. Newsflash people, a woman can be the SAME exact person whether she is wearing a face full of makeup or not. What??! YUP!

Are some women shallow, stuck up or vain? Probably. Do all of them wear a full face of makeup every day? NOPE.

I don’t think it should be considered a sin to care about your appearance, nor does it indicate that you are not caring about other causes, issues, people or things. You can look good and still do good. Similarly, you can care less about your appearance and be a shitty human. One is not synonymous with the other. Some of the most down-to-earth and real people wear makeup, and some of the biggest fake a-holes do not.

Please, for the love of all that is holy, stop telling women who wear makeup that they look better without it or that they don’t need it. STAHPPP. First of all, that’s not a compliment, it’s a judgement, and secondly, it’s not going to change the fact that they wear it.  Once again, they are not wearing it for you and your idea of what is aesthetically pleasing. 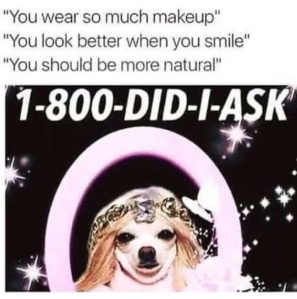 No, they most certainly did not. Nor do they sit around in their house daily wearing  a full face of makeup, contrary to what you might believe. If you only see them post pictures of themselves when they are wearing makeup, that’s just how they prefer to be seen. We don’t see Gwen Stefani without her glammed out face on do we? No, because that’s how she identifies herself and that’s obviously how she feels her best. And she’s fierce AF.

They want your approval

Obviously if they wanted your approval they wouldn’t be wearing makeup, because obviously that’s what you’re telling them you approve of.  Obviously.

True story; I haven’t heard women who wear makeup judging those who don’t. Sure they may look at your bare visage and think about how some mascara would really make your pretty eyes pop, and how your lips and coloring are perfect for the newest shade of MAC lipstick, but they aren’t going to tell you that you need it, or that you would look so much better with it on, because that would just be rude, right? Right.

2 thoughts on “Myths about Women Who Wear Makeup”