If you aren’t following Jenny Mollen’s outlandish, quirky, honest and often controversial Instagram page, you might not recognize her name without the mention of her famous husband, Jason Biggs.

An actress, published author, contributor at Parents Magazine, and advocate for healthy eating in children with her side hustle Dictator Lunches, Jenny has a multitude of accomplishments outside of being married to the American Pie actor. She is also well known in the online mom community for her entertaining Instagram page and witty banter.

Jenny is raw, candid, as real as it comes to the point of shameless (watching her Instagram stories will have you bearing witness to a plethora of laughable and sometimes questionable shenanigans from removing her own hair extensions with nail clippers, to getting Botox & fillers and being high on edibles or hiding from her kids in the bathroom.)

Her books are written in the same tone as her every day life- blunt, humorous, sometimes shocking, slightly erratic and always entertaining.

A revealing post on Instagram last week had a similar delivery but left a few people scratching their heads. The social media star and mother of two took to Instagram to share a picture of herself with her oldest son Sid (his face concealed for privacy) and the caption stated poignantly that she had dropped her 5-year old on his head, causing a fracture to his skull and a trip to the ICU. She went on to thank the medical staff and her husband and assured other parents that they weren’t alone. 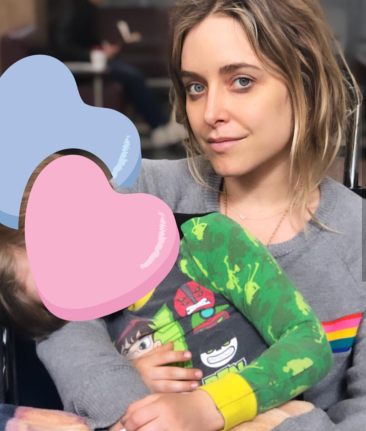 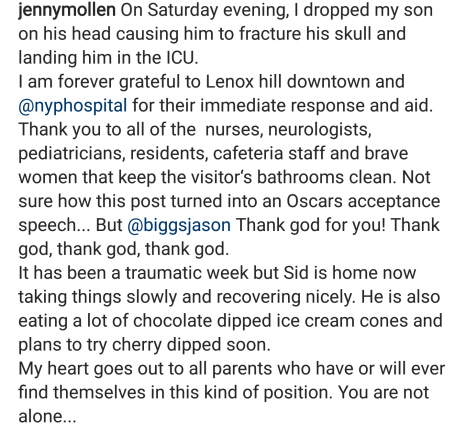 The post received a lot of attention and an outpouring of support and love, with many parents chiming in with admissions of their own experiences with accidents involving their children, while showering Jenny with empathetic heart emojis and praising her parenting skills.

Some commended her for bravery and “realness” and for shining light on the unedited parts of motherhood that many experience but don’t talk about.

And although thousands upon thousands of comments showed empathy for the actress/author, a few passed harsh judgement about her parenting skills and her character, some accusing her of abuse or staging a cover-up, and telling her to get off her phone.  Others questioned the motives of the post and referred to her caption as cold and narcissistic.

But most were left with unanswered questions surrounding the incident and the logistics of it. How did it happen? In what way was she carrying her 5-year old son at the time of the accident that caused him to fracture his skull? Is there a PSA she could share with people about the dangers of  ‘x’ activity?

One Instagrammer commented: “so sorry to hear! Do u mind explaining how it happened. I’ve heard of people dropping babies accidentally and they land on their heads but how did you drop a 5 year old on its head? My 5 year old hardly ever gets picked up and if she did and I happened to drop her she’d land head up.”

Her Instagram stories, typically updated every few hours with adventures in Jennyland, gave no insight into the incident and all but disappeared save for a couple unrelated share posts.  After the head injury post, she shared pictures of her sons on Easter and no further mention at the time of this writing has been given to the incident.

Maybe the details are no one’s business, but it appears that many people were left with  questions about the post and incident itself, and the vagueness surrounding it.  After all, if you’re putting anything about your life on social media, particularly if you’re a celebrity, you can expect that people will have questions and start trying to fill in gaps on their own.

Thankfully everyone in the comments section collectively agreed that they were relieved that her son was on the mend and recovering well, and that the story had a happy ending. At the end of the day, that’s what matters most.